SO, WHAT ABOUT THE INTELLIGENCE OF DOGS

Each dog has its own unique personality. The full ranges of personalities we see in humans exist in dogs - the main difference being that cruelty a human trait that does not exist in dogs.

I don't think we really know the intelligence level of dogs - in the sense of limits.

Dogs rely on instinct, intuition, they use so many of their senses that humans have forgotten how to use, and have other senses that we do not even understand or know about. I believe most Modern-day humans have lost the most important intelligences...common sense, instinct and intuition and with that has gone their sense of humility. Humans are not the most intelligent creature on this earth. The type of intelligence human's posses seems to create a population where cruelty, arrogance, insensitivity and stupidity exist in abundance. Empathy and the will to really learn, see and grow is a rarity.
Dogs dream and have nightmares. As individuals, they have their own likes and dislikes when it comes to food. As each person has their own individual palette tending to salty, sweet etc, so too do dogs.
Dogs talk back, they engage in conversations with each other and with us, they smile, they feel joy, depression, grief and many of the emotions that we do. They know how to manipulate their humans to get what they think they want much as humans do with other humans.

They enjoy comfort (couches, beds, etc.). Dogs thrive in an environment that offers structure and work, as do humans.

There are some big differences but many commonalities.

Dogs are not cruel, but many humans are. Dogs do not hold grudges, they hold associations - much easier to change than a grudge is! They enjoy 'human food' (human food is animal food after all!) however we do not enjoy dog kibble...at least most of us humans do not. My dogs love fruits and vegetables, yogurt, fish, eggs etc. They would, no doubt like fast food too - but they will not be getting any from me...only pizza!

I think the biggest thing that humans tend to forget is to employ common sense and not indulge in hypocrisy. For example, when a human yells at their dog to stop barking, the human is barking too. When the human yells at their dog and the human is angry, frustrated, dominating etc. the human is in no better a state than the dog is in - this is hypocrisy. This lacks common sense, and does not consider the intelligence of the dog. Would you follow the directions of some one that was not in control of them selves? No, neither would a dog - it is not how we accord respect, it is not how dogs do either.
Humans get so caught up in their own emotions they forget how much they affect others. In general humans tend to be emotionally reactive and less observant than dogs. Humans must train themselves to be aware of how they communicate (their body language etc.) whereas dogs are aware naturally. I think humans were at one time too - but we lost this ability in the modern evolution of society and technology.

I see so many similarities between dog and man. But as technology evolves, humans shed those fundamental tools that can make a human being a good person - while on the other hand dogs remain true to those gifts of nature - instinct, intuition, common sense.
Non-human animals such as dogs and elephants most definitely grieve at the passing of a loved one.

If one of my bunnies picks a fight with another of my bunnies...guess who is their ASAP to intervene and break up the fight, gently but effectively...Tasha, my Australian Shepherd...I never taught her to do this. She is also very maternal. Herding instinct you say...go ahead be sighted blind if you wish...


How do people learn right from wrong? A child who takes another child's toy will not necessarily 'back down' and return the toy just because the other child is upset. An adult must (in most cases) teach the child right from wrong.

Of my 10 dogs, some just naturally would not take from another while others had to be taught the same way I taught my daughter. There is no difference.
If I pull an apple off my apple tree and say 'OK guys' my dogs will gather around and wait for me to distribute pieces of the apple in a fair manner. They sit in a circle around me and respectfully wait. If one gets a little pushy I look at the dog and they know to back off and be polite. As long as everyone treats each other with respect in this situation there are not fights. Fights only occur when 'fairness' is not unilateral...dogs know. 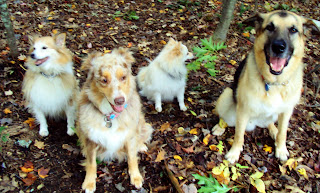 Email ThisBlogThis!Share to TwitterShare to FacebookShare to Pinterest
Labels: Communication intelligence of dogs